Robellini palms, also known as dwarf palms, are popular ornamental plants, and as their name implies, they resemble miniature palm trees. They have slim, grayish-brown trunks with lush manes of evergreen fronds.

Robellini can adorn both outdoor gardens and homes, as indoor trees, providing you with the feel of the tropics and the low maintenance of a palm tree, minus the encumbering size of traditional palms.

Dwarf palms thrive in a warm and humid climate with plenty of sunshine, similar to that of their native Southeast Asian regions; however, they can grow healthy in locations with more frigid temperatures as well. If you choose to grow your dwarf palm indoors, you’ll not only be graced with their exotic presence but will also enjoy the benefit of their natural air purifying attributes.

These mini trees are very resilient. They aren’t fussy about the soil they grow in; whether sand or clay, it’ll do. They are resistant to short spouts of drought but can withstand short periods of standing water without rotting.

Robellini are not especially susceptible to pests and disease. Still, they are known to be loved by red spider mites, so it’s best to periodically remove dry fronds, flowers, and fruit to avoid attracting them.

Robellini palms bloom creamy-white flowers from spring into summer. Their edible fruit comes in from September until October.

The optimal growing zone for dwarf palms is USDA zones 10B and 11. Nonetheless, they can flourish in 9b zones, just keep them sheltered during the cold winter months.

Both male and female trees bloom; however, the date-like fruit is exclusive to the female Robellini palm.

Be sure to have at least one male dwarf in the landscape or area to pollinate the female flowers to produce fruit. The miniature dates are reddish-purple when ripe and are edible. 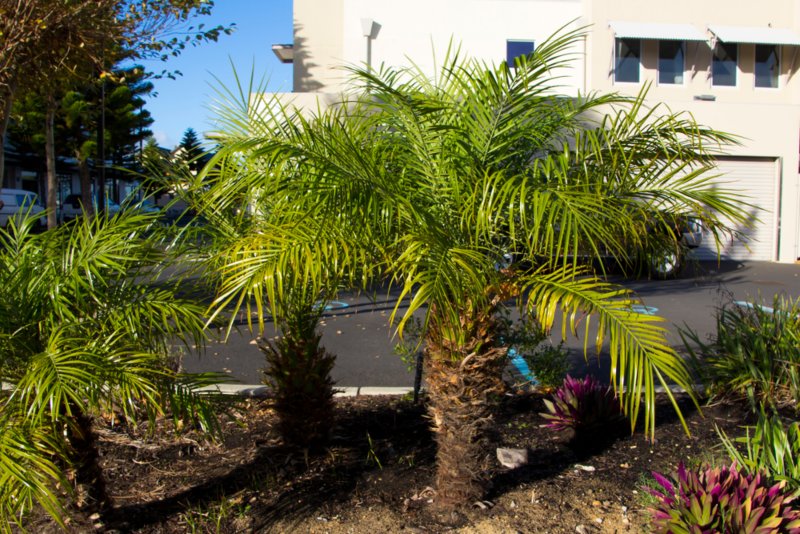 Dwarf palms can grow in partial shade to direct sunlight.

Trees planted in mild climates and those grown indoors should get a minimum of six hours of direct sunlight. You should also keep indoor Robellinis away from drafty vents and air conditioners.

In sunny and hot areas, keep dwarf trees in partial shade to protect their fronds from the intense UV rays.

Newly planted dwarf palms should be watered every day for approximately two weeks. Once they establish their roots system, you can water the young trees 2-3 times a week, depending on the climate. You may not have to water mature trees as often. Just make sure the soil never dries out completely.

Avoid watering robellini palms during the hottest hours of the day—water either early morning or evening.

Rodellinis thrive in warm and humid conditions but can withstand temperatures as low as 26 F.

Dwarf palms can thrive in various soil types as long as it remains moist and well-drained. The soil should be acidic to slightly alkaline but never too acidic or too alkaline. Using a pH meter, you can monitor the soil’s pH level and adjust it accordingly, using lime or sulfate. Fertilize young trees with specialized palm fertilizer every month during their growing season. In contrast, mature trees are usually fertilized every three months to four months.

Robellini palms are non-toxic to humans or pets.

Propagation is relatively simple if there’s a mother plant that produces offshoots. To propagate, carefully separate the offshoots from the base of the mother tree while maintaining the roots intact as best possible. Place the offspring in a pot with moist but well-drained soil and place them in a well-lit area but away from direct sunlight. After a few months, the tree can receive more light exposure.

Do not prune robellini too often, as they can maintain their aesthetics without regular pruning. However, be sure to remove old flowers, fronds, and dates as they may also attract and house harmful pests.

Tips on How to Prune Your Spider Plant