Many gardeners turn to organic pest control with the right intentions but make the error of thinking that organic automatically means nontoxic and good for the environment. While this is often true, you may be surprised to learn that sometimes using an organic pesticide can cause more harm than using a chemical one. If you are striving to garden organically and want to do what is best for both your family and the environment, there are some things you need to know about organic and synthetic pesticides.

What are organic pesticides?

Organic pesticides are pesticides made from natural sources, generally from plants, with little or no processing before use. While organic has earned the reputation as wholesome and pure, this simply isn’t the case with all organic and/or natural pesticides. According to Scientific American, numerous organic pesticides pose serious health risks.

But doesn’t Organic or Natural mean the pesticide is safe?

No. Organic does not mean safe. Organic simply means the pesticide is derived from a natural source, which may or may not be safe for your family and the environment.

Rotenone is an organic pesticide made from the roots of several tropical plants, but that doesn’t mean it is safe for either wildlife or humans. Rotenone works by attacking a cell’s mitochondria. It has been shown to cause symptoms similar to Parkinson’s Disease in rats and can potentially kill a wide variety of species, including humans, explains Scientific American.

While rotenone can currently only be used as a piscicide (to kill fish) in the US, it can be manufactured and sold by countries outside the US and marketed as an organic pesticide. In addition, if you have old products in your shed labeled as organic, they may contain rotenone.

If you choose to purchase and apply a commercially produced organic pesticide, be sure to check the label carefully and research the safety of the ingredients.

Ironically, some man-made pesticides may be safer than some organic pesticides leading to confusion over whether choosing synthetic or organic pesticides is best for your family and your garden. As a rule, choosing the safest pesticide, whether it is organic or synthetic, to control the pests in your garden is the wisest choice. According to the University of Illinois Extension, you should read and research the environmental hazards and toxicity hazards of any pesticide, whether it is labeled as organic or not.

What are some safe organic pesticides?

Insecticidal oils and soaps are nontoxic to both humans and wildlife and do not typically kill beneficial insects. These soaps and oils must be applied to the plant coating the upper and lower sides of the leaves, as well as the stems. They do, however pose some risk to the foliage of your plants. The Clemson Cooperative Extension recommends apply insecticidal soap when humidity is low, the temperature is below 90 degrees and the plants are not water stressed to prevent damage to foliage.

Neem oil is made from an extract of Neem tree seeds and works to control many insect pests. It works best on larvae or nymphs by blocking their breathing pores so they cannot breathe.

Capsaicin is the ingredient in chili peppers that makes them hot. It is effective in repelling a host of insect pests, like leafhoppers, aphids and thrips. It is also known to repel some nuisance animals like squirrels, deer and rabbits. Capsaicin may cause irritation to the skin and mucus membranes and should be handled with care, but it does not cause other harmful effects to humans.

Garlic is also thought to repel insect pests and may also repel animals such as deer, rabbits and squirrels. You can purchase commercial products with garlic, but some prefer to plant garlic near plants likely to suffer insect pests to deter them. Garlic is thought to repel squash bugs, Japanese beetles, cabbage worms and Colorado Potato Beetles.

Diatomaceous earth is a powder made from fossilized single-celled algae called diatoms. It is effective against soft-bodies insects. It is nontoxic to humans but will cause lung irritation with prolonged exposure. It also kills honeybees. 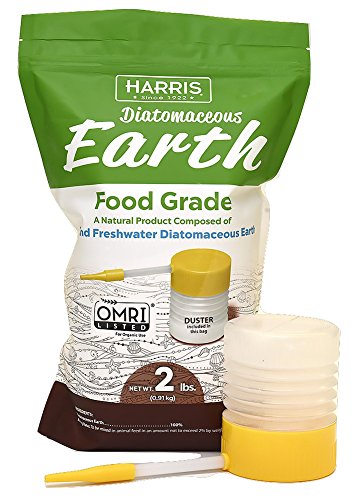 What other natural ways can you control insect pests in the garden?

The best way to control insect pests is keeping weeds at bay and keeping the areas free of litter or garden debris. Weeds and other garden debris provide hiding grounds for insect pests. Follow these tips to keep your garden in shape.

It is recommended that you try the methods above to keep insect pests under control before resorting to commercially prepared organic formulas as they may not be as safe as you assume.

14 Container Plants that Keep Mosquitoes Away

Choosing the Best Plants for Pots or Containers

Growing Hostas: How to Grow and Care Guide

Tips on Getting Hyacinth to Bloom Every Year