You are here: Home / Problems / Garden Pests / Tips to Get Rid of Moles in Your Garden Moles may just be trying to find food, but the tunnels they build as they travel around your lawn can devastate your garden. Moles usually stay underground, but when they tunnel, the soil they push out of the way with their huge paws creates ridges that can uproot plants. The good news is that moles are usually solitary, so you’re likely not dealing with a whole family, and they usually don’t want your plants themselves. Moles eat insects in the soil and prefer to tunnel through moist soil that moves easily; while trapping and removal are usually the best options, you have a number of ways to make your yard look really unappetizing to them, too.

A warning first: Be careful with poisons. You’ll find commercially available poison baits and fumigants, but these can be tricky to use and are not good choices if you have pets or kids, or if you have other wildlife that passes through your yard that you don’t want to hurt.

Trapping and Exclusion Are Your Best Alternatives

The fastest way to get rid of a mole is to trap it. This can be a live trap or one that kills them; if you use a live trap, you’ll have to release the mole at least 5 miles away from your home, if not more.

If you use a trap that kills them, you’ll have to find out how your city or county wants you to dispose of the dead mole.

Both types of traps are available commercially. Wear gloves, and keep pets and kids away, even from live traps. You can also have a commercial pest service take care of the trapping. 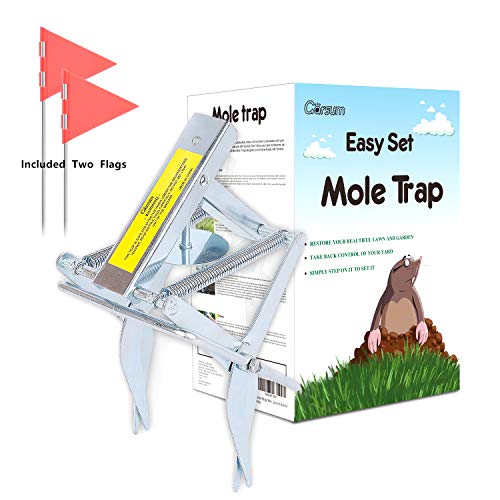 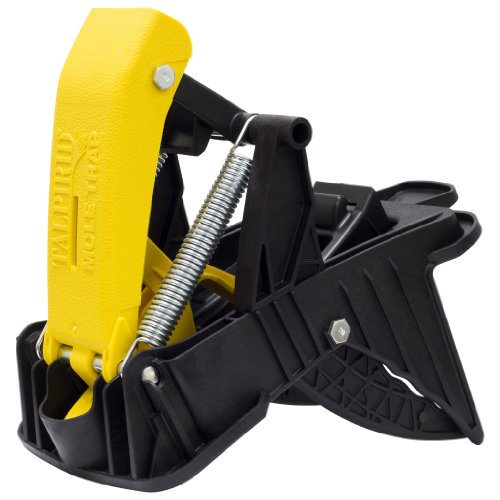 One version of trapping involves flattening the mounds of dirt and waiting to see if the mole comes back. You observe your yard and see if any soil moves; then, you’re supposed to jam shovels on either side of the movement to trap the mole. At that point you’re supposed to dig up the mole, place it in a box, and take it somewhere else. This can be difficult if you don’t know how big the mole is or if you hesitate; you don’t want to accidentally hurt the mole with the shovel. Plus, it’s understandable if you don’t really want to dig an animal with giant claws up out of the ground without it being in a trap already.

Exclusion of moles is similar to exclusion of other ground-dwelling animals: fencing that extends into the ground by at least a couple of feet. The underground portion should be metal or hardware cloth, which moles can’t break through. You can surround your yard, or, if you’re not too bothered by the mole – maybe you have a large yard and the mole is hanging out in the back portion – you can surround individual beds or part of the yard.

Again, moles are solitary and do eat bugs, so there can be an advantage to their presence if you can keep them away from landscaping and other areas that their tunnels can damage. However, it is possible for a couple of moles to invade your yard separately but simultaneously. Surround beds with the hardware cloth or metal fencing, making sure the cloth or metal extend at least 2 feet down into the soil, if not a little more. Place a barrier under the bed as well, to form an underground box of sorts.

READ ALSO:  Tips to Get Rid of Groundhogs

Moles eat bugs, and if your yard doesn’t have the grubs and other bugs they like, they won’t spend much time there (although a new mole who doesn’t know that your yard has no bugs can show up later; this is why exclusion is such a big deal when you live in an area with moles). Add beneficial nematodes to soil to reduce the grub population; also look into attracting birds that eat the same insects. Note that this doesn’t guarantee moles will go away, but it should increase the chances of the mole giving up on your yard.

Because moles move by tunneling through soil, and because they like moist soil, changing those conditions can also reduce the chances of moles staying in your yard. Improve soil drainage in your yard to make the soil less moist. Unfortunately, the sandy, loamy soils that moles like are also ones that tend to be great for growing plants, so don’t rely solely on improving drainage to repel moles.

Sometimes home remedies to scare away or repel garden pests work, and sometimes they don’t. In the case of moles, they usually don’t work. Various remedies like pepper, hair, and other substances are said to repel moles, and you can certainly try them, but they may not bring the best results.

Of the home remedies, a mixture of three parts castor oil and one part dish soap tends to have more enthusiastic anecdotal evidence. You’re supposed to mix 4 tablespoons of this mixture with 1 gallon of water and spray it on the tunnels and mounds you find. This makes the soil unappetizing and basically gives the moles a stomach ache. You can also buy premixed, castor oil-based repellents to spray in your yard.

READ ALSO:  Attracting Birds That Eat Pests to Your Garden

Another potentially good option that will at least add some color to your yard is to plant daffodils and marigolds, whose fragrances moles supposedly don’t like. The same goes for alliums, including garlic, leeks, and onions. Try planting those and see if that reduces signs of moles in the garden. At the very least, you’ll have some tasty additions for dinner when the garlic, onions, leeks, and so on mature.

Be aware that with moles, your best plan of attack is multifaceted. Remove moles you know you have and do your best to exclude and repel new moles through barrier fencing and plants that give off odors the moles don’t like.